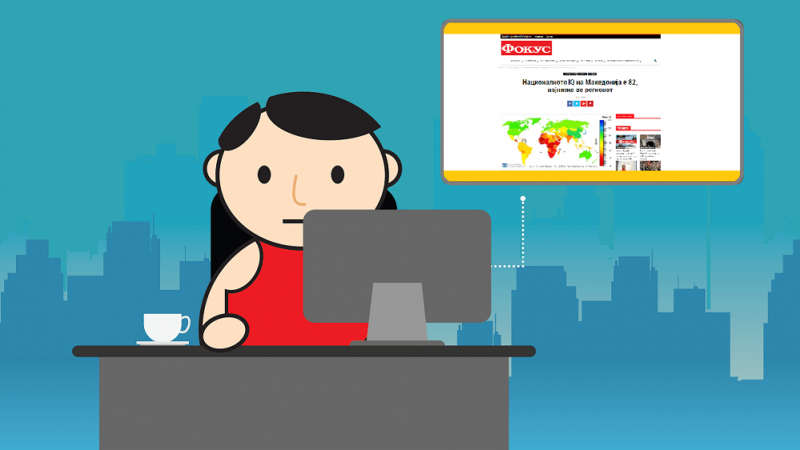 Illustration of fact-check report “The IQ is OK, but journalist standards are at low level,” by Crithink.mk. CC BY.

This story is based on two different stories, one by CriThink.mk and another Meta.mk News Agency, both projects of Metamorphosis Foundation.

On July 2, 2019, Macedonian news site Fokus published an article titled “National IQ of Macedonia is 82, the lowest in the region.” It was illustrated with a color-coded world map ranking countries based on the average intelligence quotient of its populations, with Western Europe, North America, and East Asia at the top of the ranking. The article had over 3,500 Facebook reactions within a week.

The article lists as its main source the book “The intelligence of nations,” authored by Richard Lynn and David Becker and published by the Ulster Institute for Social Research, a think-tank based in Northern Ireland which Lynn directs. What the Fokus article lacks, however, is key background context on this source.

Richard Lynn is a highly controversial figure whose work has been consistently criticized by the scientific community for its lack of scientific rigor, misrepresentation of data, and for promoting a racialist political agenda. In April 2018, Ulster University stripped Lynn of his title of psychology professor emeritus after concluding that he advocated for “views that are racist and sexist in nature.”

Lynn’s think tank — which isn’t connected with Ulster University — also publishes the journal “Mankind Quarterly” which promotes various racial theories that the broader scientific community rejects. Lynn also regularly collaborates with ultra-right-wing publications such as Right NOW! and VDARE and is often praised by extreme right-wing figures around the world.

The Fokus article triggered a cross-border disinformation wave in the past weeks, according to anti-disinfo article by Meta.mk. Shortly after publication, it was widely plagiarized (copy-pasted with minimal changes of the text and without attribution) by several outlets based in North Macedonia, including the website Lider, which is part of a group of right-wing publications owned by Hungarians with ties to the regime of Victor Orban.

The Lider article, headlined “The lowest in the region: National IQ in Macedonia is 82,” was then listed as a source by the Serbian news site Kurir on an article titled “MACEDONIANS WILL DISLIKE THIS RESEARCH: They have the lowest IQ in the region, read here who is the smartest!” On the next day, back in North Macedonia, Kurir’s sister publication, news website Sloboden Pečat (both are owned by the Serbian company Adria Media Group), published a verbatim translation of that story in the Macedonian language, amplifying the visibility of the racist ideas.

The EU-supported project Critical Thinking for Mediawise Citizens – CriThink fact-checked the Fokus article, contextualizing its sources and raising questions about the journalistic standards of Balkans media. Journalist Jugoslava Dukovska, who signed the report, wrote: “Almost always these media fail to report on the sources of the alleged research and don’t attempt to verify their credibility. Instead, they exploit their potential for sensation.”

Not the first time

Screenshot of the article by Fokus with a map reflecting a white supremacist worldview.

This isn’t the first time Macedonian or the wider Balkans media have passed Richard Lynn’s ideas off as scientific fact.

In 2014 websites from around the region published a story claiming North Macedonia had an average IQ of 91, lower than most Western European countries but higher than those of Albania, Montenegro, and Serbia. That story was based on a Czech blog post that quoted another of Richard Lynn’s books, “Intelligence: A Unifying Construct for the Social Sciences”, co-authored with Finish writer Tatu Vanhanen and also upholding racialist theories on intelligence.

At that time, Croatian portal Index.hr published a news item titled“This map shows the average intelligence of the peoples of Europe”. Immediately afterwards, Macedonian website MKD picked it up and published a story titled “Macedonian people are among the stupidest peoples in Europe.”

In 2015, dozens of Macedonian portals published similar news items about the allegedly smartest and stupidest people in the Balkans. These stories are still available online.

Only a few professional journalists and scientists have questioned the credibility of the viral articles. None of the websites have published the story have so far issued corrections or retractions.

In the Balkan context, stereotyping members of different ethnic communities is as old as it gets. There are folk tales from central North Macedonia dating back to the 19th century that say the Shopi — the people who lived in the today’s border region between Bulgaria, Serbia and North Macedonia — thought the sea was a huge fish soup, and that they took out spoons to eat it when they came to the shore. Later, in the former Yugoslavia, it was Bosnians who were the butt of many jokes.

The cyclical spread of pseudoscientific notions about IQ based on race or ethnicity taps into pre-existing stereotypes as well as it reinforces them in this region — no wonder they generate so much social media attention. But while this translates into more clicks for the media outlets who publish this disinformation, it also fuels resentment, discrimination, and hate.

Scientists have long dismissed theories that link ethnic or national origin with intelligence. Intelligence itself is a complex concept that is typically examined by considering the interplay between nature and nurture. Many studies have shown socioeconomic environment, education level of caregivers, and health and nutrition all play a role.

Despite all scientific evidence demonstrating otherwise, white supremacists in the United States and Europe systematically advocate for the notion that intelligence is primarily a result of genetic traits, usually postulating that a narrow subset of white people is genetically superior.

Ironically, the Balkan nationalists who typically deem US and Western European right-wing extremists as ideological alliesfail to see — or choose to ignore — that those pseudoscientific theories usually rank their own ethnicities below that of Western countries.

Flood prevention work for the A44 completed in Penybont

Second chance for unpaid carers in Powys to apply for £500...

Have your say on the future of street trees in Machynlleth