The young man who tragically died following a road traffic collision involving two vehicles on Saturday 4th of June 2022 has been named as Droy. He was 20 years-old and came from the Nefyn area. 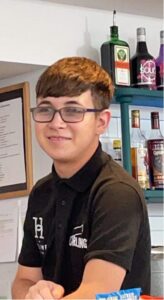 ‘Droy was raised in Morfa Nefyn and schooled in the local area. Droy was a happy, outgoing hardworking man who had time for everyone.
‘He was very well known in the local area and enjoyed spending time with his friends and family and always had a lovely smile on his face.
‘He was in a happy relationship with his girlfriend who he deeply cherished and loved, who were both looking forward to their first holiday abroad together this year.
‘He was devoted to all his family and would give anyone his time. He had numerous interests and hobbies which included fishing, music, seeing friends, and wild camping and walking in the local area. He was a keen cook and enjoyed trying new foods.
‘Droy enjoyed travelling with his family and visited numerous countries. Whilst being with the Army Cadets he took part in numerous exercises in the countryside.
‘Since leaving school he had worked in the local area in several establishments, where he has been held in high regard by both staff and customers.
‘Droy was a key part of the community in Nefyn and will be remembered for his hard work behind the scenes at Y Heliwr public house, and his beaming smile behind the bar.
‘He recently finished his brick laying course in Dolgellau College, where he gained numerous distinctions for his work and made some good friends.
‘The family wish to thank those who have reached out to them in this difficult time. We are absolutely heartbroken, and we would now like time to grieve and would ask to be given the appropriate privacy.’
Specialist officers continue to support Droy’s family, and Sergeant Liam Ho of the North Wales Police Roads Policing Unit renewed his appeal for anyone who was driving on the B4354 last Saturday who has dashcam footage of a blue BMW X3 or a black Ford Fusion, to contact police on 101 quoting reference B080679.
Do you want to write an article or blog for www.magazine.wales or any of the news websites for Wales? Contact us.  Email: [email protected]

Partners come together to mark the start of a £12.2 million...